On the Road with Flo

A travel and art blog

Weather plays a crucial role in the lives of us all. This is especially so for those who make their living collecting and processing the sap of maple trees. Maple syrup is big business and a proud tradition among those in the Northeastern states of the U.S.

There is a small window when sap can be collected: when maple trees awaken from winter dormancy until the first buds of spring appear. During this time there is much work to be done as well as time to celebrate. Maple syrup festivals are held across the area once the sap begins to flow. There are demonstrations of maple syrup production, tastings of syrups, creams and butters, and of course pancake breakfasts to sample the new year’s syrup. Each farm with their special technique or secret recipe makes for interesting visits.

I met Kent Goodermote at Kent’s Sugar House in Berlin, NY. Here he has produced maple syrup for over forty years. In contrast to the large automated commercial syrup producers, Kent’s facility is a shack in the woods using a wood burning evaporator. Kent and his partner Todd Hewitt, with the help of family and friends, complete every task necessary to produce their maple syrup.

The work begins in the fall as Kent and his crew gather the 8-10 cords of firewood needed for the evaporator. As winter settles in they plan how many taps they will place in the trees and how best to lay out their lines. Sap is no longer collected in buckets but in long plastic tubing connecting the trees in a large system depositing the sap in central locations. Once the trees are tapped the wait on Mother Nature begins. This year with unusually warm winter weather the sap began to flow in mid-February. When we were visiting in late March they expected the season to be over in a few days producing a low yield for the year. Typical seasons can run from early in March to as late as the end of April. Mother Nature is in control during the entire process. In his forty plus years Kent has produced anywhere from 50-270 gallons of syrup in a given year. It takes 43 gallons of sap to produce one gallon of syrup. 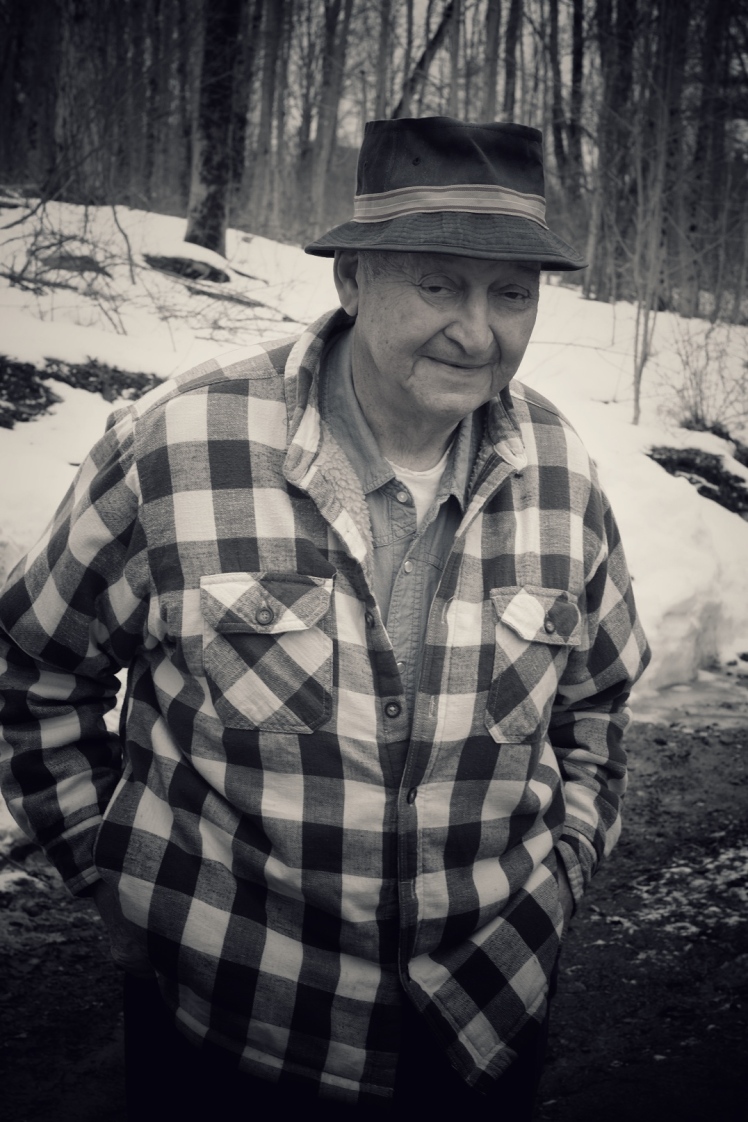 One of the regulars at Kent’s Sugar House is Kent’s friend Loren. Loren is a true mountain man of upstate New York. In 1922 Loren’s father purchased 250 acres of wooded land for $500 on Berlin Mountain. Loren and his 10 siblings were born in the house his father built and where he resides today. He has left Berlin Mountain only to serve his country and returned in 1954 to never leave the area again. Loren never had much interest in beaches and cities and the mountains had everything he needed or wanted. He spent his life as a logger and charcoal maker and continues that work today. Many of the trees he harvests now are third generation growth on the property in his lifetime. Today the high property taxes on his land threaten to force Loren from his mountain.

One of the larger maple syrup producers visited was Ioka Valley Farms. As the names implies they are more than maple syrup producers. There are farm animals of all types along with crops raised and wagon rides. This time of year is all about their maple syrup. They produce upwards of 3,000 gallons of maple syrup each year. Using a modern automated evaporator their production is fast and efficient.

The main attraction at Ioka Valley Farms has to be Terry Lynne. She spends her time in the Sugar House describing each of the products made and handing out samples. She does so with an energy and enthusiasm that is hard to describe. She reminded me of a snake oil salesman in an old western movie. She even referred to one of the maple syrup products as an elixir for good health. But Terry Lynne is serious and no nonsense about maple syrup. She says it’s “supercalifragilisticexpialidelicious!”